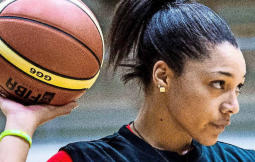 La’Keisha Sutton was like any other basketball player, she loved the game, even if she had to play with the boys to make it happen. From Trenton, New Jersey, Sutton played her high school ball at Trenton Catholic before she continued her career at the University of South Carolina where she played guard under Dawn Staley. Now she is continuing her career in Germany. Sutton made a name for herself even before she became a Gamecock. Her high school career, especially her senior year, she received numerous awards for her outstanding plays. Her senior year she was awarded New Jersey Gatorade Player of the Year, Trenton Times Player of the Year, and Trentonian Player of the Year. She also was a four­time all­country first team selection, lead her team to their second­straight title in 2008 where she was named MVP. She also won two championships with her AAU U17 team. When asked when she knew she wanted to play basketball after high school Sutton responded by saying , “I knew I wanted to keep playing basketball after high school because that’s all I ever did. All I cared about at the time. Besides I had scholarship to go to college, which I seen as a way to get an education and degree for free, escape poverty.” Once Sutton got to South Carolina, things did not change much. She became the 11th player in South Carolina history to have at least 300 assists and scoring at least 1,000 points in her career. Her 1,299 points ranks her 16th in school history and is 12th in assist with a 357 career total. Out of her 125 college games she scored in double igures in 66 games which included 8 games with 20 or more points. In assists she lead the team 61 times and recorded 24 games with 5 or more assists. Just her senior year Sutton was named second­team All­SEC and to the All­Defensive Team by the league’s coaches and also drew honorable mention All­SEC honors from the Associated Press. She ranked 23rd in SEC in scoring and 11th in assists and was the team’s top scorer 11 times. When it comes to her awards, Sutton said the best way to describe how she feels/felt is grateful. She said, “I can’t take credit for anything God gave me this natural gift of playing basketball, the moves I make the way I play it’s a natural gift. I haven’t won a championship since high school so that’s what I want to do next. Win a championship.” While Sutton was in college the saying “Fan Favorite” came up a lot. Fan Favorite became Sutton’s nickname so she went to a local shop and got two shirts printed up. Sutton said she wore them daily and when people would ask her what Foot Locker or store did she get them from and people online asked her where they could get them from she looked into getting more shirts printed up. When asked did she think Fan Favorite would be as big as it is now Sutton replied by saying, “Fan Favorite started out as a random idea, but the people #teamfanfavorite took it and made it into what it is today. The support, the excitement for it, just sharing the brand word of mouth took it to the place it is today.” Fan Favorite now has just more than t­shirts. The newer items include hats, bracelets, sweat pants, hoodies, and socks. To see these items visit http://www.fanfavoriteapparel.storenvy.com. Sutton now is playing basketball overseas. 2015 is her second season overseas where she is now playing for TV Saarlouis Royals in Germany. She spent her first season overseas playing for a team in Finland. “Playing overseas is different than college or high school because you’re now looked at as a “professional.” You have to show up and perform every single day in practice and in games. I can say overseas, college, or high school the game does not change basketball is basketball. If you work hard and are coachable you’ll do fine. I still hear Coach Staley’s voice in my head though every single time I step on the court,” Sutton replied when asked what is the difference from playing in high school and college vs playing overseas. Every player or person has something they want to be remembered by or want people to think of when they hear their name or their company. Sutton wants people to see and feel hope. Hope in themselves, in their future, in their dreams. She wants them to know hat you don’t need glamour or exposure, hard work prevails. She is just trying to keep people uplifted and encouraged. Living proof dreams come true. As Sutton would say, “You don’t need glamour or exposure, hard work prevails.”